welcome to taipei
smell the wet air
thick with car, motorcycle, bus fumes
step into the subway
feel the thick heat of thousands of bodies that have pulsed through
look away from the eyes
there are too many of them
but they are all differing degrees of bright
once upon a time children
now shadows of children that are hiding
hiding behind make-up and heels,
suits, vests, and bags
hiding behind poverty stricken grime and loud begging cries,
prostitute women shy yet brazen leaning against the bridge
welcome to taipei
raise your arm above your head
hold on tight as the bus rattles over the bumpy roads
stopping often to avoid hitting the thousands of reckless fast others
biking, motorcycling, walking, and driving
feel the bodies pushing and pulling against your own
and hold your breath when the door opens
and someone steps in smelling like cigarettes
the smell of the wet pavement rising up behind him
well, might as well step out now then
and smell this wet pavement
rich with too many years of too many feet and vehicles
wonder about what lies beneath the pavement
raise your head to look beyond the buildings
and watch the clouds reaching and pulling towards and away
from the tall mountains
some soft some jagged
so far, too far in the distance
imagine the echoes of monkeys howling
close your eyes yes even on this dirty street corner and
see ancient spirits living in holes in rocks in caves in mountains
mountains so old that even here in this city
there are shrines honoring the mountains spirits and earth gods
say yes to the grandmother that offers you some incense
she gives you three sticks of incense
one for the sky god, one for the earth god, and one for the god of the present moment
smell all the years of incense trapped in this one little room
all the smoke wafting and billowing up into the red rafters coloring them a dark blood red
closed eyes again, seeing the blood of my own body coursing through into my heart
feeling the pulsing of my feet hard against this cement-layered earth
feeling lava pushing way down below my feet
so far below
but it once created this very island we stand upon
welcome to taipei, taiwan
sit upon these old stone steps with me now and watch the sun rise
it first hits that tall skyscraper over there
and then the light bounces over to that other skyscrapers over there
until eventually we can see the reflection of big red circular mister sun himself reflected on that skyscraper far over there
and the birds will sing louder and louder
until eventually they all get drowned out by the motor vehicles’ songs
welcome to taipei
watch the faces of the thousands of people passing by and listen to their little songs
the gate guard sings a native american chant as he bikes to his post
a customer returns day after day to a shop. they are friends now
the schoolboys walk fast and chatter even faster. something is so very exciting.
the women’s voices are high pitched, their skirts even higher pitched.
an old couple walking hand in hand, him carrying her purse and umbrella, her laughing at his jokes.
couples at night all over the old temple, watching the lights of a city that doesn’t quite sleep.
faces with scarves that show only the eyes. walking fast. going somewhere incredible.
browned farmers at farmer stands everyday with loud voices and fresh fruits.
bus driver that says peace be with you, and you are blessed. gentle eyes in the mirror.
old women dancing all the same dance in the park, saying come join us, and welcome.
the eyes of a baby in the subway, shining, laughing, innocent, curious, and amused.
welcome newborn one, welcome to taipei.
here, enjoy this cup of fresh tea.

Oh that big bad world. With all its chemistry and sites, o passion and envy. And here I stand like a firm little oak tree in a vast forest forcing my branches to the Sun. Sun shine on me. And I stretch and wait. Try not to get distracted by the glow of the beetles exploring my length, or shiver when a man comes by to look me once over- to see if Iâ€™m worth slaying. But IÂ desire to play, I want to have legs, not roots. I see all the animals in the forest roam, I see what they bring back, and the glint in their eye like theyâ€™ve been transformed. But Iâ€™ve only changed from fall to spring to summer to winter and back- the excitement has become dull. I want to know what it looks like above the tree tops, I want to feel the wind without all the rest of the forest crowding in. I want to sprout feet and roam continent after continent! Broaden my horizons on the east the west the north the south! Callous my toes twist my tongue to new sounds etch an epic story into my spine! I want to sit quietly and watch, experiencing the world in motion, then get up and play along. I want to be transformed! Donâ€™t get me wrong, standing here, very stilly, has made me stronger, taught me that all nourishment is offered from the Sun. Sun rays have endowed me with a new skin, given me vibrant life beyond my power. But yet here Iâ€˜m rooted, standing like a triumphant piece in a garden, and I canâ€™t help but look around and notice that the landscape has become quite dry. For months now, I find myself watching the gravity of the ground, the wind rocking my turning leaves, dreaming by day, scheming by night. All the while, praying for a sizable hurricane-what a sure liftoff it would bring!

I want cough syrup. 2 bottles full! I want lots of empathetic looks. Give me long hugs! I want a band aid big enough to wrap around this throbbing useless organ. Ugh no not a love poem! The Darkness said, â€œLove is just a feelingâ€. I sang along and fast forwarded to the guitar riff that made your body feel like it just got a hyper electric shock. I didnâ€™t really get the whole love feeling thing. I didnâ€™t care. I still donâ€™t. You see, every song on the radio has something to do with this obsessive â€œif I canâ€™t have you I canâ€™t take another breathâ€ infatuation. Does it have something to do with Edward and that unvampire girl? All I know is if Iâ€™m not in love Iâ€™m a societal outcast.Â This ain’t cynicism.Â I watched three multi-teired white frosting cakes pose for photos in the park across the street last week. I caught sight of 99 bride and groom duos with obscure frozen expressions in the last month. Iâ€™ve tuned into, please never make me count, discussions of ring descriptions, complementary colors, and lingerie, this year to last me my whole life through. Really selective mutism sounds luxiourous. Iâ€™m not completely one sided, engagement photos get me. Itâ€™s those angles, colors, and artistic expression-freakinâ€™ heart melting. I rather write myself into a love story then live one, because love has gone and lost itâ€™s appeal. Itâ€™s the cheatin, wife beatin, take you for a ride and leave you there, love blues. The take me out to dinner cuz I love free meals, kiss me now but I wonâ€™t mean it later, luv ya babe 4 eva, romantic fairytale. OH, so sweet. How touching. Sigh. How perfect. I can’t wait for my turn for heaven on earth.

The idea has existed now, for sometime, and I canâ€™t help but mourn parting with it. Let me tell you the circumstances.

Attached to the idea are detailed stories of grand adventure, now never to be played out.

The idea has existed quietly in the back of my mind, company in the loneliest of hours,

upon the shelf, taking upon the form of a discarded book

( with the Brief thought: I may read that one again).

I totally forgot the idea, pranced around and whimsically explored with out,

spent days hating the idea and detested pondering the thought of it,

then all at once was entranced- romanced on a dance floor- I fluttered my eyelashes at the idea, toying.

Rolled the idea around on the curve of my tongue, smirked, and was smitten once again.

Be sympathetic Reader, the idea held charm, as ideas went I viewed this one with many additional bells and whistles- features to satisfy my deepest heartâ€™s, never to be uttered, fantasy.

One day I laid, twisted in sheets, the idea suspended in the morning light. I objectively viewed the idea,

glanced at it, threw my feet over the bed-got up to get a better look, and paced its axis.

Looking up from where I stood the idea was obviously the lousiest idea Iâ€™ve ever had.

Yet suddenly without forethought reason I stopped,

Reader, all I could do now, no longer ignorant, is decide to abandon it. Haul it to the curb. Get the dirty business done.

Hands outspread palms revealed to the sky, I watch the idea shrink, and it becomes a mere figment, a shadow, a sliver, and then its gone-evaporated as if it never was. And Iâ€™m left sitting here, lonely perplexed disheveled without-awake-wishing i could play with it just once more. Wondering if I was right to consider letting it go.

But knowing it was about time. 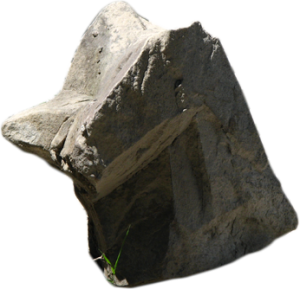 This rock by the river. Once blanketed by thick and rushing water, now exposed and dry. Leftover residue on it’s sides. Jagged lines. Straight edges. Broken corners into new angles. Who knows how long it has had its place there. Where is its origin? It has seen its own surroundings through time â€“ which I was not present to see. Yet, I have seen all around the mountain â€“ which it may not have ever been to.

What knowledge do I have to gain from such a statue?

Does the gift of time outweigh the curse of being stationary? Only this rock knows; Statue. Divine. Imperfect. Perfect. Time enduring. An example.